The image to the right is intended to be placed on a t-shirt. 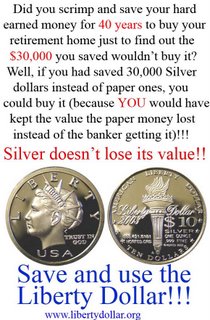 It contains a simple statement about value and how to retain it.
Pretty innocuous, don’t you think?

Looks can be deceiving….

One of the members to the list this image was a part of wrote:

The statement is false. $30,000.00 in silver 1 .oz at time will not buy a house in my market…won’t even touch it besides the fact no one would take payment for a house in silver liberty. Just an evaluation.

Being bored, and wanting to make a few people think, I wrote the following:

If you had saved 30,000 dollars in silver dollars, as minted by the US prior to the 60’s (which was 1 dollar for 1 ounce) you would have 300,000 dollars in silver coins (at least) today. Enough to buy a house in almost any market. That was the point being made; silver retains value, which makes the statement true. I would be willing to bet that a deal could be made in which silver can be exchanged for property. Most people who own property understand what real value is.

Then this flew out of the peanut gallery:

My response “whatever, enough to buy a house” lead to a rather lengthy exchange concerning house values, the definition of “return“, the definition of “Dream House”, the questionable parental blood lines of parties to the argument, the sexual practices of those involved, etc. and ad nauseam (the average flame war) which then ended up with this:

I’m beating a dead horse here, but I like horse paste, I guess. All the bitching about what the value of silver coins from 40 years ago would be today lead me to investigate what was available 40 years ago, and what it would be worth today.

If you go here there is a description of what was available, coinage wise, and why, during the period being referenced.

So the coins that were available (and at face value then) were the Morgan and Peace dollars. Referencing the price guides at the links above, and going with the lowest price listed (15 dollars, if I’m not mistaken) for a silver dollar of that era, we get a rough value for 30,000 silver dollars being something in the realm of 450,000 dollars, not the 300,000 thousand that I originally estimated. As you can see, I was being conservative in my estimate.

…BUT, even given the (inflated) average value for a house in the US as stated by others, 225,000 dollars, you could clearly buy a ‘better than average’ house (a ‘dream house’ in the estimation of the average person) with 30,000 silver dollars saved for 40 years.

With that argument, gentlemen, I rest my case. 😉

There was, of course, another explosion from the peanut gallery (something about my mother, I’m sure) but I consider the case closed. I’m probably mistaken though.

Why? Because this sort of stuff can just keep cropping up:

This might provide a more easily comprehensible example to those of us who have not been 29 for 35 or so years.
When I was in high school, (58, 59, 60, and 61) you could go into any bank and exchange Federal Reserve Notes in any denomination for Silver Dollars (also known at the time as “Cartwheels”. They contain 371.?? grains of fine silver and some other metals to make them wear better as circulating coins. They were therefore 90% silver as required by the U.S. Constitution and the 1792 Coinage Act made in pursuance thereof. They were honest weights and measures.Convertibility into silver was stopped in 1964.
Had you, in 1963 placed 3,000 Silver Dollars into one Safe Deposit Box and 3000 one-dollar Federal Reserve Notes in another Safe Deposit Box, and still had them today, you could make this comparison.
In 1963, If memory serves, you could buy a fully loaded mid-line Chevy for about $3000.00. (remember, you could convert paper to silver and silver to paper then one-for-one)
If you went to your Safe Deposit Boxes today, and drew out those two stashes of $3000.00, the 3000.00 silver dollars would still buy you a brand new mid line Chevy (because you could convert them into $30,000.00 in Federal reserve notes by selling them at current market prices.)
However, the 3000 Federal Reserve Note “dollars” that you took out of the other Safety Deposit Box, would probably scarcely buy you much more than a nice set of wheels, tires and wheel covers.
…
The U.S. “Government” has become the greatest enemy of Freedom and Prosperity ever to exist on this planet. It smashes and crushes Liberty everywhere; like a plague of Locusts it consumes everything its path, leaving “scorched earth” and rotting bodies behind, all the while, grinning like some evil clown and proclaiming that it is trying to “Spread Freedom” to all peoples.
It is effectively a parasite which is like a vampire that has learned not to immediately kill the host; but simply drink it’s blood a little at a time, keeping it weak and emaciated but still retaining it as a food source.
The Federal Reserve admits that the income tax is NOT to raise revenue to run the government, but is primarily to facilitate the “re-distribution of income.” What do they mean by that? What they mean by that in plain English is that it’s purpose is to raise money to buy votes with and thereby enable it to continue it’s consumption of all that is good in America.
America today is like a once robust, but gaunt, weak and sickly “Paul Bunyan”, lumbering along – unaware of the giant vampire bat attached to the back of his neck. The Vampire (U.S. Government) grows bigger and stronger by the day and will soon be larger than the host. It, like any parasite, will continue to feed until the host dies, unless the gentle giant awakens to his plight and removes the Vampire from his neck.

I mean, it never ends, does it? Now I have to go fight a vampire federal government, when all I was worried about was some newbies question about a t-shirt design involving using US silver dollars to buy a house…