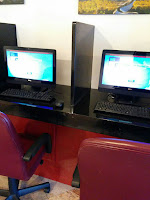 When I walked up to these public terminals  a few minutes ago, the couple next to me helpfully offered the advice “that one is broken”. A few quick keystrokes later I discovered that the problem was the touchscreen interface was registering false touches. Probably the result of previous abuse.

While I was amusing myself with the interface, attempting to see if it was hackable in the context of my rudimentary knowledge, the couple next to me got up and left, having completed their search. These are pay terminals. They require a credit card to access. This was the second thing I learned. I also learned that the people who set these terminals up were pretty good at their job. Physical plugs all behind lock and key, drives and ports in another part of the building. Hardware essentially out of reach without damaging the wiring.
The software is a version of Windows 7. Most of the known bypasses from within the OS (known by me) are locked off, and you can only get to the Windows interface by paying in advance or convincing the system you have paid. This knowledge I gained by accessing the broken system that the couple had paid for previously. Paid for and then couldn’t use and paid for a second system.
Some people apparently just pay for things without ever even asking why; a willingness to be defrauded that I’ve never understood. This couple had paid twice for information their phones could have given them for free. They had also walked away from the area leaving their information available on two different public terminals. Accessible to any nefarious person who wandered by. I did them a favor and logged them off both systems. I’m apparently not as big an asshole as I thought.